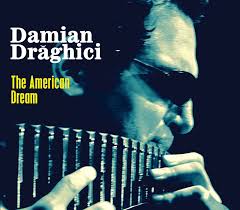 The pan pipes aren’t the first instrument that comes to mind when you think of jazz maestros. But that the instrument of choice for Romanian DAMIAN DRAGHICI. Damian left his homeland when he was just 17 and went on to study at Berklee College of Music where he developed his passion for jazz. Since then he’s toured the world with his pan pipes –working alongside people like Cyndi Lauper, the Gypsy Kings, Shaggy… even James Brown! He then went on to front his own band, Damian and Brothers.

Century Jazz Records have just released Damian’s latest solo album, but to call ‘The American Dream’ a “solo” set is a little misleading. To help him deliver his take on a not-so-obvious-selection from the great American songbook, the piper has enlisted a stellar team of top side men…. amongst them Chris Botti, Michel Camilo, Eddie Daniels, Luciana Souza, Stanley Clarke ,Brian Bromberg and Frank Gambale.

Amongst the 13 chosen tunes are Draghici’s unique take on ‘You Must Believe In Spring’, ‘Waltz For Debbie’ and ‘One Note Samba’. Familiar tunes, yes but I guarantee you’ve never heard them like this  before.

DAMIAN DRAGHICI’S ‘The American Dream’ is out now