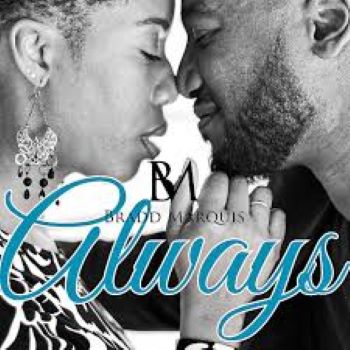 ‘Always’ is one side of a new double A sided single from singer, songwriter, and now producer, BRADD MARQUIS. The song is a romantic, contemporary soul ballad and though written a few years back, Mr M has decided to put it out now as he’s just gotten himself married… sweet.

It’s a good little tune with an old school flavour and a mighty soulful vocal from Bradd. More intriguing however is the single’s other wonderful offering…. ‘The Thrill Is Gone’. Old soul heads will recognize the title as one of BB King’s greatest recordings, but this ‘Thrill’ is a new song, though it does reference the King classic – especially via some remarkable, biting, Lucille-style, blues guitar from (I’m guessing) producer Marcus Machado who we know as a mean guitarist himself. This new ‘The Thrill Is Gone’ is an emotional affair – musically and lyrically. Bradd says in part it’s a lament for the loss of his grandparents – major influences in his career.

Both songs come recommended and they’re out November 13th. We believe that they’ll also be on an upcoming Bradd Marquis EP, ‘Love’, due January on Soul Man Music/Purpose Music Group.