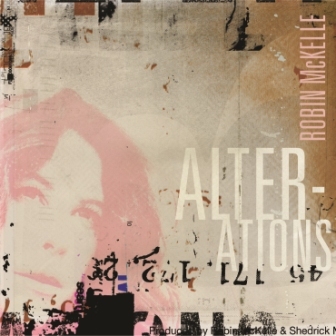 With 2019 not yet over, plenty of top names are lining up big 2020 releases…. amongst them US soul and jazz chanteuse ROBIN McKELLE. As we’ve previously announced Ms Mc will be releasing a new set on February 14th; and the album, ‘Alterations’, marks something of a departure for the lady who enchanted audiences with her magnificent ‘Fairy Tale Ending’ back in 2012. You see the 11 tracker that is ‘Alterations’ is a “covers album” – but no ordinary “covers album”. Robin has selected a set of songs originally presented by female innovators … people like Dolly Parton, Sade, Amy Winehouse, Adele, Janis Joplin, Carol King, Billie Holiday, Joni Mitchell, and Lana Del Ray.

Amongst the repertoire are ‘Back To Black’, ‘Jolene’, ‘Rolling In The Deep’ and ‘No Ordinary Love’ – which is the album’s lead single, offered in a new jazz setting with sparkling piano accompaniment from co-producer Shedrick Mitchell,. The treatment here illustrates the flavour of the whole collection… new ideas on old favourites, fusing jazz, soul, r&b, blues and rock. ‘Jolene’ for instance is quite transformed. There is one McKelle original song too…. ‘Head High’ which easily holds its own in such august company.