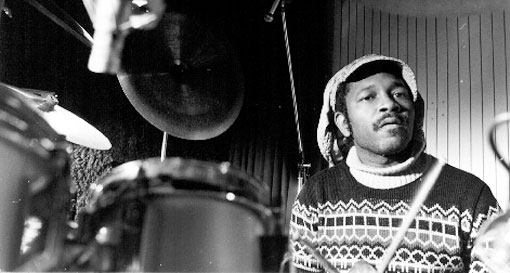 Jazz drummer ALPHONSE MOUZON died on Monday 26th December at Northridge, California. He was 68 and died from Neuroendocrine Carcinoma, a rare form of cancer.

Born in Charleston, South Carolina, in November 1948, Mouzon attended Bonds-Wilson High School before going to New York where he, unusually maybe, studied drama, music and medicine. As a drummer his first gigs were in Broadway shows before he joined McCoy Tyner. After Tyner, Mouzon worked with Weather Report then signed a solo deal with Blue Note in 1972. Amongst his solo albums was the acclaimed ‘By All Means’, which featured Herbie Hancock, Lee Ritenour, the Seawind Horns and Freddie Hubbard.

In a distinguished career he built a huge reputation as an innovative yet dependable drummer. Amongst his credits is work with Larry Coryell’s Eleventh House, Miles Davis, Roberta Flack, Stevie Wonder, Eric Clapton, Jeff Beck, Carlos Santana, Patrick Moraz, and Chubby Checker. In 1992 he set up his own Tenacious Records.

Mouzon also worked in films. In 1991, he performed on the movie soundtrack album ‘Dingo’ and in 1996 he appeared as an actor and drummer in the Tom Hanks-directed film, ‘That Thing You Do’. His other movie credits include ‘The Highlife’, ‘First Daughter ‘ and ‘The Dukes’.