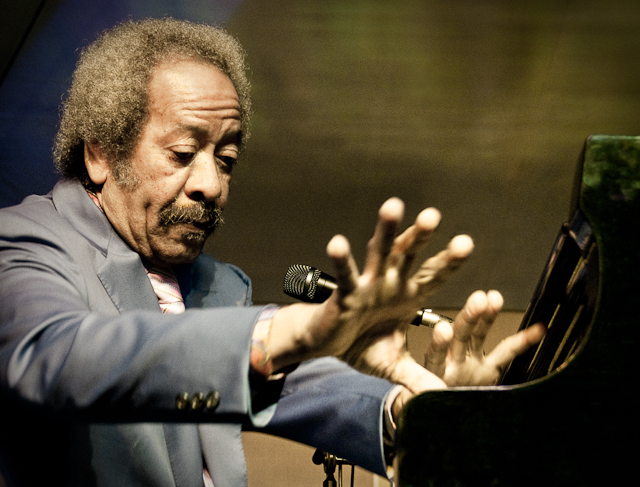 New Orleans music legend ALLEN TOUSSAINT died on Monday 9th November. The Spanish news paper El Mundo reported that Toussaint suffered a heart attack shortly after coming off stage at Madrid’s Teatro Lara. He was later found in his hotel and resuscitated – but suffered a second heart attack en route to hospital. Aged 77, Toussaint was best known in the mainstream for working on dozens of soul records in his home town of New Orleans but in a lengthy and garlanded career he’d worked on countless other projects including collaborations with people like Paul McCartney, Irma Thomas, Aaron Neville, Joe Cocker, Glen Campbell and Elvis Costello. Toussaint had been due to play the London Jazz Festival this coming weekend.

Born in 1938 in New Orleans, Allen Toussaint, encouraged by both parents, learnt the piano as a child and made his pro debut substituting for Fats Domino at a local recording. He made his own recording debut in 1958 with ‘The Wild Sound of New Orleans’ on which he was credited as “Tousan”. The RCA album was a set of instrumentals.

In 1960 he joined Minit Records as a producer/studio supervisor and worked on recordings like Irma Thomas’s ‘Ruler of My Heart’, Chris Kenner’s ‘I Like it Like That’ and Benny Spellman’s Lipstick Traces (On A Cigarette)’ and the beat combo classic ‘Fortune Teller’ (Spellman again). Between 1963 and ’65 he was in the army but on demob he worked on what became his signature and biggest hits – Lee Dorsey’s ‘Ride Your Pony’, ‘Get Out of My Life Woman’, ‘Working in a Coalmine’ and ‘Everything I Do Gon’ Be Funky’.

By the mid 60s Allen Toussaint was recognised as New Orleans top producer and ran his own Sea-Saint studio. Artists from all genres came to Sea-Saint to experience the unique qualities that they felt Toussaint could bring to their music…. those who worked there during this time were Paul McCartney, LaBelle (he produced the iconic ‘Lady Marmalade’), the Band, Albert King, and Little Feat.

Simultaneously, Toussaint enjoyed his own career as an artist. His releases included the albums ‘From A Whisper To A Scream’, ‘Life Love and Faith’, ‘Southern Nights’ and ‘Motion’. In the 80s and 90s he concentrated more on studio and theatre work.

After Hurricane Katrina in 2005 Toussaint relocated temporarily to New York City where he once again began to perform often revisiting songs from the early years of his career. Back home in New Orleans, in 2006 he recorded an acclaimed album with Elvis Costello.

In 1998 Toussaint was inducted into the Rock and Roll Hall of Fame. The citation said his greatest contribution “was in not allowing [New Orleans] old-school R&B traditions to die out but by keeping pace with developments in the rapidly evolving worlds of soul and funk”. In 2013, he was presented with America’s National Medal of Arts, the highest honour given to an American artist. At the ceremony President Obama said, “After his hometown was battered by Katrina. Allen was forced to evacuate, but then he did something even more important for his city – he went back. Since then, Allen has devoted his musical talent to lifting up and building up a city. And today, he’s taking the stage all over the world, with all kinds of incredible talent; doing everything he can to revive the legendary soul of the Big Easy.”

Allen Toussaint is survived by his two children … his son Clarence, known as Reginald, and his daughter, Alison, both of whom managed his career in recent years