ALLEN TOUSSAINT AND DEODATO COMING TO RONNIE SCOTT’S IN APRIL… 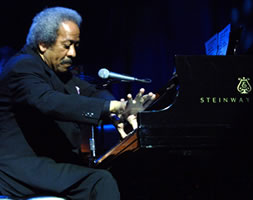 Legendary New Orleans singer-songwriter/producer/pianist, ALLEN TOUSSAINT, is scheduled to appear on Monday 14th and Tuesday 15th April at London’s iconic Ronnie Scott’s venue. The 76-year-old Crescent City native is a 1999 inductee of the Rock And Roll Hall Of Fame and was recently awarded the National Medal Of Arts, which was presented to him by president Barack Obama. His back catalogue of classic songs include ‘Working In The Coal Mine,’ ‘Ride Your Pony,’ ‘Yes, We Can’ and ‘Southern Nights.’

Brazilian pianist, EUMIR DEODATO, comes to Ronnie’s for three nights – from Wednesday 16th to Friday 18th April. Although he’s best remembered for his CTI hit, ‘Also Sprach Zarathustra’ – a funky reimagining of a Richard Strauss classical music piece used as the main theme to Stanley Kubrick’s sci-fi movie 2001: A Space Odyssey – which made the Top 10 in the UK pop charts in 1972 his credits as a producer and arranger include working with Roberta Flack, Frank Sinatra, Wes Montgomery, Astrud Gilberto, Kool & The Gang, k.d. lang and Bjork. In recent years, he’s worked in the sphere of smooth jazz and his last album was 2010’s ‘The Crossing.’ He will be backed by a UK band comprising Graeme Flowers trumpet, Nichol Thomson trombone, Ben Castle alto/tenor sax/flute, Graeme Blevin alto/baritone sax/flute, Al Cherry guitar, Andrew McKinney bass, Pat Illingworth drums and special guest, Snowboy, on percussion.

For more info on these concerts and other upcoming performances go to http://www.ronniescotts.co.uk/