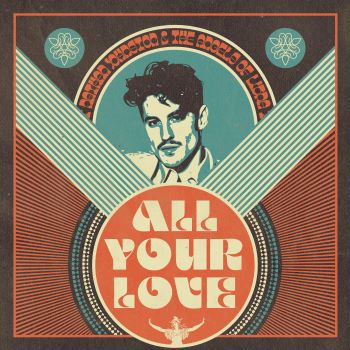 We were first introduced to THE ANGELS OF LIBRA in June of this year when they were promoting their eponymously titled single. We learned that the band were  a 10 piece soul outfit from Hamburg “pledged to making music the old fashioned way”. The vocals on ‘Angel of Libra’ came courtesy of Irish singer, NATHAN JOHNSON and between them they made a sombre, intriguing, sound.

Nathan is out front once again on the band’s new single, ‘All Your Love’ which has just been released via Waterfall Records. The new tune is a whole lot brighter than ‘Angel’ and it features nifty, catchy brass work supporting Nathan’s blue-eyed take on old school soul. The band’s team tell us that the sound and style was inspired by Anderson Paak. You get the idea… old-school beats and phrases, superimposed on top of modern R&B and hip hop soundscapes. Very catchy!

We’re also told that the song is “ultimately about the passion and lust that goes hand in hand with meeting someone new” but it’s the breezy, brassy tune/melody/production that will grab you!