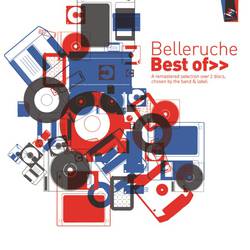 London-based trio BELLERUCHE aren’t everyone’s cup of soul tea but there’s no denying that the band have won admirers from within the more adventurous soul communities.

The band – vocalist Kathrin deBoer, guitarist Ricky Fabulous and turntablist DJ Modest debuted in 2006 with the long player ‘Turntable Soul Music’ and though it wasn’t soul as most people know it, it did attract widespread attention from musical taste makers and broad-minded collectors. Now with four albums under their belt, Belleruche’s label, Tru-Thoughts, have decided that the time is right to unleash a “Best Of…” collection.

Released on 28th October, ‘The Best Of Belleruche…’ is a 28 track, 2 Cd collection that offers all the singles and key cuts from their albums along with essential remixes and hard to find B sides. Get the flavour of the outfit’s laid back electronic jazzy soul on ‘Northern Girls’ or the percussive Yam Who remix of ‘It’ll Come’… music for adventurous ears…. and if yours are, find out more @ www.belleruche.com