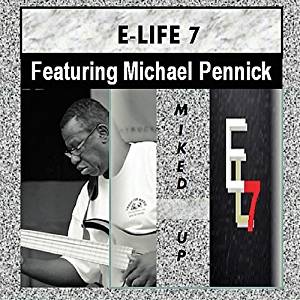 ‘MIked Up’ is the debut album from New York jazz outfit, E-LIFE 7. The driving force behind the band is the pairing of bassist Mike Pennick and guitarist Ron Walker. The duo worked together in an R&B combo, The Exoutics, but after exhausting that band’s possibilities, they decided to explore their love of jazz. To help them deliver they recruited keyboardists Rodney Spears and Charlie Crymes Jr. percussionist Tim Webb and drummer Ron Walker and they then set about recording their debut album, ‘Miked Up’ which is set for late March release on Three 2 Go Music.

The 14 tracker is a funky take on smooth jazz and Pennick is clearly the main man. It’s his throbbing bass lines that dominate the album… indeed he gets special billing on the credits. All the tunes save one are band originated. The only cover is a respectful take on Stevie Wonder’s ‘That Girl’ – always sounds good.

And that name, E-Life 7? Well depending on who you believe, it’s either ‘Exoutics For Life’ or ‘Enjoy Life 7 Days A Week’.