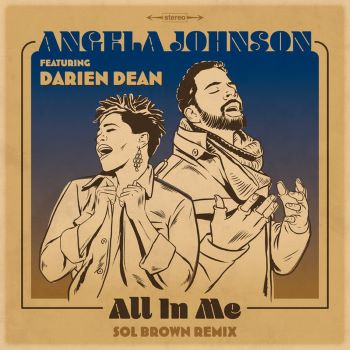 Back in 2010 ANGELA JOHNSON enjoyed success and acclaim with  her  ‘All In Me’, the focus track on her ‘It’s Personal’ album. The tune was a duet with singer/songwriter/producer Darien Dean and it’s slinky, sensual groove still sounds good.

London based, international DJ/producer, Sol Brown is a big fan of the tune  and with Ms J’s approval he’s just remixed  it, bringing a whole new perspective to the cut. He ups the tempo and  there’s am urgent insistency to matters. He says: “There’s something extra special about working on a duet, but even more so when it happens to be with 2 amazing vocalists – Angela Johnson and Darien. Some of you may recall that the original version of this track came out on Angela’s highly acclaimed ‘It’s Personal’ album in 2010. I had always been a fan of that record, so to say that I was over the moon when Angela approached me to remix this track was an understatement.”

For her part Ms Johnson says: “After working on a previous track with Sol, I felt like he was the one to breathe new life into “All In Me.” He had the right approach. He really listened to the song and created a remix that can take on a life of its own. He nailed it!” .

Angela Johnson/ Darien Dean: ‘All In Me’ (Sol Brown mix)  out now