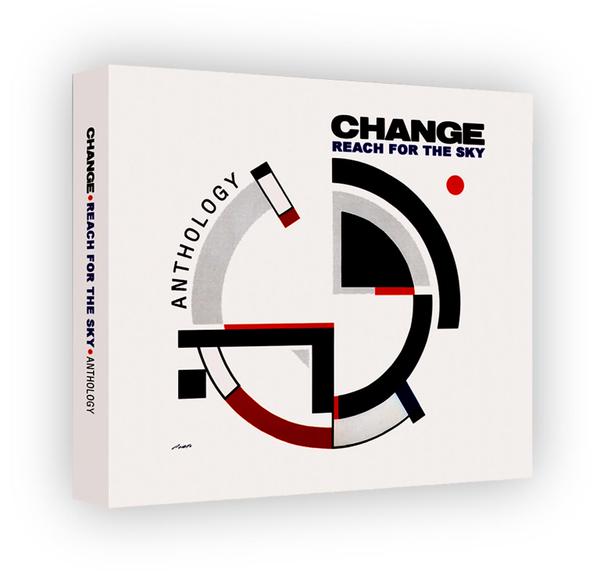 Any soul fan worth his/her soul knows that studio band CHANGE were the launch pad for a certain Luther Vandross. Dear old Luther fronted Change’s wonderful ‘Searching’ and ‘The Glow Of Love’ but despite that claim to fame, decent Change retrospective collections have been hard to find… till now!

December (just in time for Christmas pressies!) sees Groove Line Records release a fab 2 CD, 28 track Change anthology . Simply called ‘Reach For The Sky’, the set contains everything decent that the Jaques Fred Petrus vehicle issued between 1980 and 1985…. i.e. every single that made the charts PLUS a bonus remix of ‘It’s A Girl’s Affair’ from Mike Maurro.

Petrus, Change freaks will tell you, was an Italian muso who made 70s dance music with outfits like Macho, his Peter Jaques Band and Revanche. Then, teaming up with arranger Maura Malvassi and bassist Davide Romani and inspired by Chic, Petrus hit on the idea of Change and the result was some fabulous dance music.

This new collection naturally features the aforementioned Luther-vocalised winners but also includes the lesser known ‘Heaven Of My Life’ on which dear old Luther is part of the vocal ensemble that also includes his long time collaborator Fonzi Thornton.

Petrus was savvy enough to know that to survive Change needed to constantly change and evolve and to that end he used numerous lead voices…. and one of the most distinctive kicks off proceedings here …. Ms Jocelyn Brown. She fronts the still lovely ‘A Lover’s Holiday’ and ‘Angel In My Pocket’.

The longest staying vocalist in the band was James “Crabbe” Robinson. He came in when a touring band was needed to flesh out the music that the studio whiz kids and musicians had created and he possessed a remarkable soulful voice….. hear it at its best on the sweet ballad ‘Promise Your Love’.

Everything you need on Change is included here and as a bonus the Mike Maurro remix of ‘It’s A Girl’s Affair’ brings the music right into the 21st century (though if my ears are working the intro is sampled from the 60s pop hit ‘Woolly Bully’!)

To complete this wonderful package you also get a 24 page booklet stuffed with rare photos and a track by track commentary by those who were part of Change … including Ms Brown, Diva Gray, James Robinson and Deborah Cooper.

CHANGE; REACH FOR THE SKY ANTHOLOGY is released on Groove Line Records on December 4th.