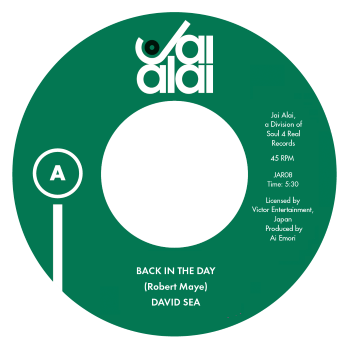 It won’t surprise those who know Sea’s music that he was gospel-reared though he “went secular” in the early 70s working as David Sea & The Question Marks who, in turn, became David Sea & The Uptown Movement. As a soloist he first worked with Jerry Weaver’s Alabama-based label while in the 80s he recorded for Hy-Tyde/T-Jaye. His later work for Neal Hemphill’s Crown Limited label like the Roscoe Robinson produced ‘Do It Right Now’ c/w ‘Who’s Been Warming My Oven’ and ‘Night After Night’ became popular on the UK modern soul scene.

David’s  first long player was recorded for the Magic City label and the acclaimed ‘An Ocean Apart’ brought him to the attention of the Temptations. It’s said that he was asked to join the Emperors of Soul but, for whatever reason, he declined the offer. Sea eventually secured a contract with the Japanese focused  label, JVC for whom he recorded three albums – ‘Searching For Love’, ‘Bed Of Sea’ and ‘Groove Mission’ and that last LP is the source of the new Soul4Real single, though the actual imprint is Jai Alai – the label which Soul4Real reserve  for music that has only  ever previously been released on CD.

The new Jai Alai 7” pairs ‘Back In The Day’ with ‘Back In Love Again’. The former is a quirky, gentle item with a generous dose of nostalgia while the ab fab ‘Back In Love Again’ will be familiar to the modern soul crowd. On release in 1996 it was a huge tune and shows why connoisseurs put David Sea in the same vocal league as Ruffin, Edwards and Woodson.

David Sea’s last solo album, we think, was 2006’s ‘Love Makes The World Go Round’ which he recorded with Frederick Knight for Park Place Records. In more recent times Sea’s worked in various Temptations tribute shows – little wonder. Like we said, he has a remarkable voice. Your writer can attest to that first hand. Sea came to the UK in 1991 touring with David Ruffin, Eddie Kendricks and Dennis Edwards and, catching the show in Southport, I can report that he held his own with all three legends. Jai Alai’s ‘Back In The Day’/ ‘Back In Love Again’ confirms that assertion. The single comes hugely recommended and why not seek out the source ‘Groove Mission’ CD too. Sale sites offer it at a reasonable price (under £10) and you’ll find plenty  more gems like the ballad ‘Your Sweet Love’ and his cover of David Ruffin’s ‘Statue Of a Fool’.

In the meantime enjoy ‘Back In The Day’/ ‘Back In Love Again’ on vinyl. Find out more @ https://www.soul4real.es/soul-4-real-records/