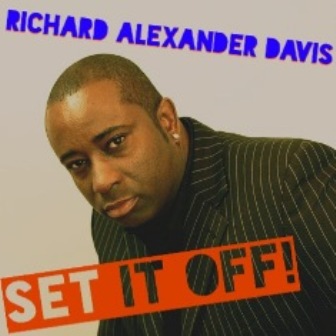 RICHARD ALEXANDER DAVIS is a classically trained piano player/singer /song writer and the cousin of the late reggae star Sugar Minott. His CV includes working in the band Mixed Breed and playing the club circuit. In the 1990’s Richard signed to Hysteria Records as a solo artist and charted with ‘Don’t Stop Believing, Party On’ in 1995. It was followed by ‘Deep Inside’. He then went on to collaborate with people like Eddy Grant, The Night Crawlers, Omar, Slick, The Real Thing and even Janet Jackson.

Mr A has a couple of solo albums under his belt and right now is promoting his latest single –a retro soul groove, ‘Set It Off’ which proves his love of the real old school! To make the point even stronger, the tune also comes in a “back to the 80z” mix (with or without rap) and there’s also a “jump up” mix.

‘Set It Off’ is one of those odd soul tunes, which, though, you can’t exactly say why just does the trick! It’s a proper ear worm that just won’t go away and it will be available from 30th August!