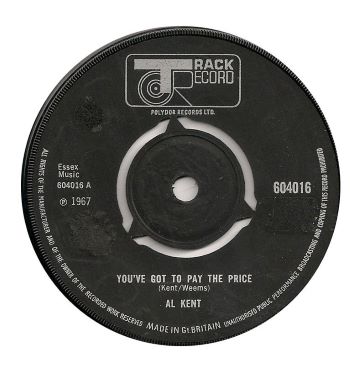 US music media is reporting the death of Detroit and Northern soul hero AL KENT. Few details have been made available. Some sites suggest Al died on June 1st; others say earlier. He was aged 84 and though he was largely ignored in the mainstream, Detroit collectors and the Northern  fraternity revered his work as writer, artist and producer.

Kent was born in Detroit in 1937 as Albert Prentis Hamilton and as Al Kent his first forays into music were in New York where he recorded with doo-wop group, the Nite Caps for Wizard and Baritone. He also had a spell in Chicago working with Chess/Cadet /Checker.

Back in Detroit he joined Ric Tic/Golden World – labels vying with the fledgling Motown for Detroit soul supremacy. Amongst his achievements at Ric Tic/Golden World were  ‘SOS (Stop Her On Sight)’, and ‘(Just Like) Romeo And Juliet’ and of course his own Northern classics ‘You’ve Got To Pay The Price’ (issued in the UK on Track) and ‘The Way You’ve Been Acting Lately.’ When Ric Tic was bought out by Motown, Kent joined the Gordy set up working with his old colleagues Edwin Starr, JJ Barnes, and The Fantastic Four. Supremes fans will also have fond memories of their version of ‘You Got To Pay The Price’.

After Motown, Kent joined Armen Boladien at Westbound, where he worked again with the Fantastic Four. He was married to Norma Toney – a prolific songwriter in her own right.