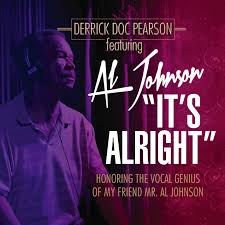 Soul singer AL JOHNSON died in October last year. He was just 65. Amongst the soul fraternity he’s best remembered for the wonderful ‘I’m Back For More’ – a scintillating duet with Jean Carn but long before that he’d been a member of 60s group The Unifics and he’d also worked extensively with Norman Connors. Indeed Connors was the producer for Al’s ‘Back For More’ album.

After the success of ‘Back For More’ Al concentrated on session work and producing though he continued to record his own work – if sporadically, while he also reformed the Unifics for a series of comeback gigs.

Parallel to this secular career Johnson also worked the gospel circuit and some of his gospel recordings have just surfaced on a 10 track album. The LP’s called ‘It’s Alright’ and its available on Derrick Pearson’s I Am Music label. Pearson is a major player on the US Gospel scene and in the 80s he struck up a relationship with Al Johnson which lasted until Al’s passing last October. The ‘Back For More’ man sang on many of Pearson’s demos and as a respectful tribute to Al’s talent Derrick has assembled ten of the best of those recordings on this album.

Soul connoisseurs know Al Johnson was a great soul stylist with a remarkable, emotive voice and here it shines loud and strong. Yes, these cuts maybe demos but they’re far from the rough, unpolished things you associate with works in progress. There are some wonderful cuts here and even if you’re not a believer anyone who loves soul will love stuff like the irresistible up-tempo ‘Sweeter Than The Day Before’, the groove-heavy ‘Very Soon’ and the catchy title track. A number of the songs are Pearson’s setting of various psalms while you also get a great version of Marvin Gaye’s ‘God Is My Friend’.