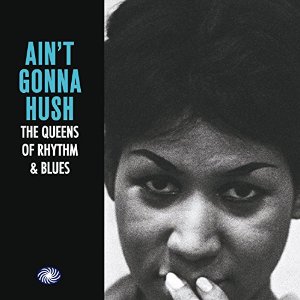 ‘Ain’t Gonna Hush’ is the latest release from archive specialist Fantastic Voyage Records and it’s a great snap shot of embryonic soul. The music on the 3 CD, 76 tracker spans soul’s formative years (mid 50s – early 60s) and, subtitled ‘THE QUEENS OF RHYTHM AND BLUES’, it (obviously) focuses on the distaff side of the genre.

The set boasts many big names…. none bigger than the Queen herself, Aretha Franklin. She’s there (pre-Atlantic, of course) alongside Etta James, Betty Everett, Baby Washington , Big Maybelle, Lavern Baker, Ruth Brown, Big Mama Thornton and Esther Philips when she went out as Little Esther.

Plenty of lesser known artists too – people like Mary Ann Fisher, Katie Webster, Paula Grimes, and the wonderful Dorothea Fleming whose ‘The Devil Is Mad’ is one of the highlights. The collection takes its name from another of the album highlights – Cordella De Milo’s Ain’t Gonna Hush’.