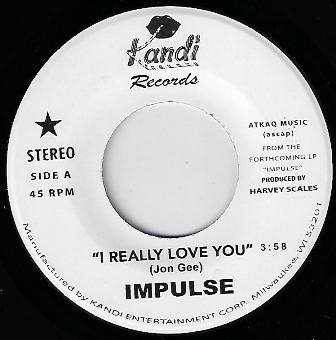 Soul anoraks might know a little something about Milwaukee group IMPULSE. But for us lesser mortals here’s a bit of bio! The band began in the 70s… Michael Reese (Rhodes Piano and background vocals), Cedrick Rupert (Lead and Rhythm guitar), Jeffrey Williamson (Drums and background vocals) and Robin Gregory (Bass and background vocals) working as backing band for The Quadraphonics. Impulse then recruited John Gee as lead singer. Gee became Jon Pierre Gee and Impulse started to strike out on their.

In 1976 they relocated to California and hooked up with the famous Harvey Scales with whom they recorded their debut album. Sadly despite interest from Casablanca and Jerry Butler’s Fountain Records, the album was never officially released. But as is the way of the soul world, some of tracks did become available. One in particular has become hugely popular. It’s a sprightly and sweet modern soul dancer…. ‘I Really Love You’ which is currently being championed by knowing club DJs.  To satisfy demand the aforementioned Jon Pierre Gee has decided to release it as 7” single on his old Kandi label and it really is a throwback delight. The disc’s B side is ‘Get The Funk Off My Back’ – yes, funky but not gritty, sparse funk … but funky, for sure!

A revamped Jon Pierre Gee -fronted Impulse still perform today and my guess is that these two tasty tunes  are highlights of their performance! Impulse’

‘I Really Love You’/’Get The Funk Off My Back ‘is out now on Kandi. It’s a limited edition 7” single and you can find out more @ david.welding@blueyonder.co.uk