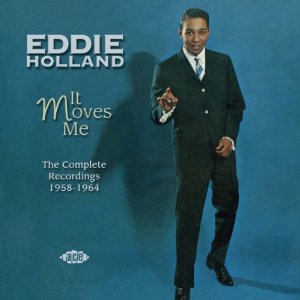 Reissue specialists ACE RECORDS open their 2012 account with a set of great releases. Of most interest to soul collectors will be a two CD set on EDDIE HOLLAND. The collection is part of Ace’s collaboration with Motown and features all the songs EDDIE recorded at the label between 1958 and 1964 when he was trying to build a career as a vocalist. Success proved elusive and EDDIE eventually joined brother BRIAN and LAMONT DOZIER in the Hitsville engine room and the rest, of course, is history. The set is a fascinating insight into the early days of Motown with EDDIE himself offering firsthand accounts of what went on in the accompanying booklet.

More esoteric, maybe, is a PAUL KELLY collection – ‘Hot Runnin’ Soul’. KELLY was an archetypal Southern soul singer-songwriter who’s long deserved some kind of retrospective. The album contains all of his solo recordings from 1965 to 1971 which were issued on labels like Lloyd, Dial, Philips and Happy Tiger. As collectable is ‘Absolutely Right’ – a look at the career of New York girl group, THE APOLLAS whose ‘Pretty Red Balloons’ and ‘Sorry Mama’ became Northern soul standards. The release collects together all their recordings for Tiger, Loma and Warner Bros. These three albums are all released on the Ace imprint, Kent.

The main Ace label offers two exceptional new compilations. The first is the label’s latest look at the output of the London American label. This time around they turn the spotlight on 1957 and as ever the showcase programmes big names and big hits alongside lesser know gems. Amongst the black music stars featured are FATS DOMINO, CLYDE McPHATTER and CHUCK WILLIS. Then there’s a look at the work of top 60s writing and producing team FELDMAN, GOLDSTEIN and GUTTEHRER . Working chiefly out of New York, they crafted pop and soul hits for all kinds of artists. The CD – entitled ‘Smash, Boom, Bang!’ – features classics like JERRY BUTLER’S ‘Giving Up On Love’, RAY POLLARD’S ‘The Drifter’ and CHUBBY CHECKER’S long in-demand ‘At The Discotheque’.

Finally Ace have also just released a second volume on the work of JOHNNY OTIS. OTIS died in January and the collection is a fitting and apt tribute to the man who was dubbed ‘The Godfather of Rhythm and Blues’. Couple this with volume 1, and you’ll have a concise overview of a true musical pioneer.