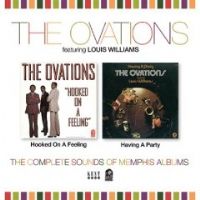 The always-dependable ACE label starts its 2009 scheduling with some tasty archive soul releases. First up there’s a 23 track retrospective on Muscle Shoals soul trio, THE FACTS OF LIFE. Originally mentored by MILLIE JACKSON, the threesome recorded for BRAD SHAPIRO’S Kayvette label and their work is held in high esteem by serious soul collectors everywhere. Still with the soul groups, Memphis’ OVATIONS have two of their early seventies albums offered as an Kent twofer; both ‘Hooked On A Feeling’ and ‘Having A Party’ show that lead singer LOUIS WILLIAMS was much, much more than a SAM COOKE sound-alike. On the compilation front, ‘Masterpieces Of Modern Soul Volume 2’ is a wonderful 24 track collection of true, lost masterpieces. Featured artists include GROVER MITCHELL, CHECKMATES LTD, and LYNN VARNADO. Slightly more leftfield is ‘The Soul OF Spanish Harlem’ … the music (chiefly from the sixties and early seventies) is just as the title describes – New York Latin Soul – of the highest order. Still out of the Big Apple is ‘Glitter and Gold’ – a loving collection of just some of the great songs of CYNTHIA WEIL and BARRY MANN. There’s lots of pop in here of course, but great soul too from artists like ARTHUR ALEXANDER, THE DRIFTERS and THE SWEET INSPIRATIONS.