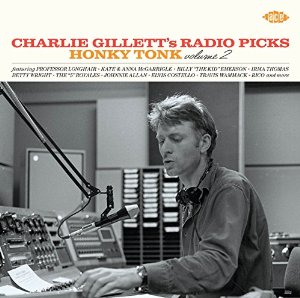 General music collectors and soul folk too will be interested by a couple of new compilations from UK reissue label, Ace Records. First up there’s a 25 tracker under the title ‘CHARLIE GILLETT’S RADIO PICKS vol. 2’. Charlie Gillett – who sadly died in 2010 – was one of the UK’s leading musicologists and broadcasters. Famed for his seminal history of rock n roll, ‘The Sound Of The City’, Charlie went on to present a long running and acclaimed radio show called ‘Honky Tonk’ (readers with long memories will also remember Charlie sitting in for Mike Raven on Radio 1’s weekend soul show) and this new album offers a selection of songs that represent the kinds of things that Charlie played out.

The most obvious thing about the album is its range. Charlie was known for his eclecticism and here you can enjoy music across all kinds of genres…. country, reggae, authentic R&B, Americana, indie rock, doo-wop, blues, folk, classic pop and, of course, soul. The soul crew will be happy here with things like Irma Thomas’ ‘Ruler Of My Heart’, Paul Kelly’s ‘Stealing In The Name Of The Lord’ and Betty Wright’s ‘Clean Up Woman’. Non soul highlights include Leroy Van Dykes’ ‘Walk On By’ (No, not the Dionne song!), Sir Douglas Quintet’s ‘Nitty Gritty’ (No not the Gladys Knight song!) and ‘Wave A White Flag’ – a 1975 recording from Elvis Costello when he went out as “D P Costello”.

The second great new Ace compilation is their latest dip into the back catalogue of London Records – the Decca owned label that issued indie American music in the UK. This generous 27 tracker chronicles London’s output in 1965 and as you can imagine there’s some cracking soul in here…. James Brown’s ‘Have Mercy Baby’, Lou Johnson’s ‘A Time To Love A Time To Cry’, Dobie Gray’s ‘The In Crowd’, Barbara Mason’s ‘Yes I’m Ready’ and Inez and Charlie Foxx’s ‘Hummingbird’ amongst them.

Plenty of great pop too. I mean – ‘Just Once In My Life’ from the Righteous Brothers, ‘The Story Of John Hardy’ from the Sir Douglas Quintet and a couple from Burt Bacharach. There are plenty of rarities and oddities too and it all goes to show that, pop-wise, there was much more to 1965 than the Beatles and the Merseybeat boom!