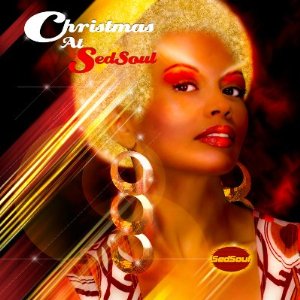 You see, modern soul boy extraordinaire, ROB HARDT and his Sed Soul people have just released what is destined to become the definitive modern soul Christmas album. ‘Christmas At Sed Soul’ is a stunning 11 track mix of Christmas songs old and new – all given that crisp, cool and sophisticated modern soul treatment for which Sed Soul is famous. ROB and his team have crafted hugely danceable arrangements and brought in some big, big names to add extra special magic to the seasonal set.

Biggest coup for the album was to secure veteran soulstress ANN SEXTON to bring her assured tones to the evergreen ‘Santa Claus Is Coming To Town’. It’s one of three big covers on the album. The others being PEGGI BLU’S treatment of MEL TORME’S ‘The Christmas Song’ and C. ROBERT WALKER’S take on DONNY H’s ‘This Christmas’. Here, the wonderful song is given an almost 80s sound and its magic lives anew.

Amongst the new songs, the EUGENE WILDE vocalised ‘I Love Christmas’ is building up to become a modern room anthem while the two COOL MILLION-led songs –’Let The Christmas Spirit In’ and ‘What Christmas Means To Me’ run it close.

Good too to see the ubiquitous NOEL McKOY on board. Good ‘ole NOEL leads on the soulful builder, ‘This One’s For You’. It’s a proper Christmas gem…. but it’s only one amongst eleven.

‘Christmas At Sed Soul’ is out now and deserves to be in all soul people’s stockings.