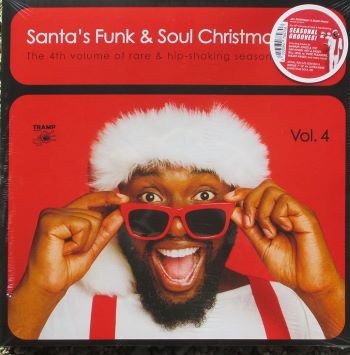 German soul reissue label TRAMP RECORDS has a reputation second to none for sourcing and releasing esoteric and obscure funk, soul, and jazz music. 99% of their music comes from obscure US 7” singles recorded (mostly) by artists who don’t even merit a footnote in soul histories. The label has issued collectable single artists sets but it’s their compilations  that really grab the attention and one of their most celebrated compilation series is ‘Santa’s Funk And Soul Christmas’. Tramp have issued 3 volumes in this series. The last was released in 2015 and that seemed to be that as the supply of rare, obscure  Christmas themed soul and funk tracks seemed to have dried up. But don’t underestimate the tenacity of the Tramp team. Over the last few years they scoured and searched high and low for cool Yule rarities and they’re now proud to release ‘Santa’s Funk And Soul Christmas volume 4’ and if you’re tired with the same old jaded Christmas tunes (I mean Donny’s ‘This Christmas’ is great, but how many times do we need it?) this could be the album for you!

From the start you know you’re getting a different take on Christmas with the rough, punky, funky opener ‘All I Want For Christmas Is A Go-Go Girl’ from little known Bey Ireland. The other big funk item here comes from Sharon Jones’ ‘Ain’t No Chimneys In The Project’.

There are lots of other soulful flavours across the album’s 14 tracks. Bill Deal and Pure Pleasure’s ‘It Feels Like Christmas’ is disco-lite; very different is  the fierce blues of Tiny Powell’s ‘Christmas Time Again’; there’s a Southern soul flavour to Major Handy’s ‘I Won’t Be Home For  Christmas’’ it’s a Northern vibe on ‘The Year Around Christmas’; then there’s ‘Christmas Strutt’ from Hot and Sassy where clearly the inspiration was the Sugarhill Gang.

In fairness some of the cuts (like Fred Sabastian’s ‘Everybody Is A Santa Claus’) are poppy while Ray Williams and the Space Men’s ‘Santa Claus’ is , well, bizarre, but like, everything else here, very, very different!