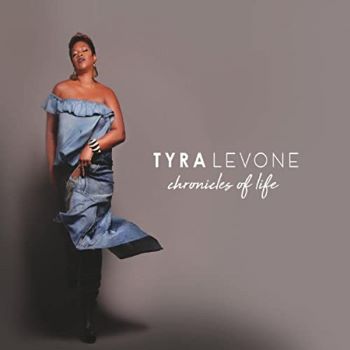 TYRA LEVONE is a singer/songwriter from Washington DC. Her background is in gospel but if you’re familiar with her work, you’d know that. Ms. Levone possesses a splendid, old school soul voice, its nuances shaped whilst she served a youthful apprenticeship singing duets with her father in church,

She debuted on record in 2015 with the acclaimed single, ‘If Only I Knew’. The dramatic ballad also betrayed the influence of people like Gladys Knight, Aretha Franklin and Anita Baker – a fact Tyra readily acknowledges.

Her debut album was ‘Testimony: A Soul Set Free’. Critically acclaimed, the ballad ‘Can’t Love You More’ was outstanding by any measure! Since then Tyra has released two chart riding singles – a luscious modern soul groove ‘Keep Stepping’ and a cover of ‘Wishing On A Star’. Opening with a nod to the Emptions’ ‘So I Can Love You’, the former was (indeed is) a classic dancer with a subtle, optimistic gospel message while the latter was a respectful take on the Rose Royce song enhanced by some sweet sax from Marion Meadows.

Tyra has just released her second LP and ‘Chronicles Of Life’ maintains the soulful excellence of ‘Testimony: A Soul Set Free’. ‘Keep Stepping’ and Wishing On A Star’ are both featured and worth repeated listening but they’re only two of many highlights. The album’s title track, for instance, is sweet and lovely and properly emotive. ‘I Like It’ is beguiling too as is ‘Shine’ which features (I’m guessing) Tyra’s daughter in the intro. Then there’s ‘So In Love’ – another big dance item… tight beats, a solid groove and that wonderful voice.

In truth, though, dip in anywhere on this album and marvel at the quality and variety. We’ve listed some of the big dancers but if you’re in the mood for something a little gentler, there are plenty of heartfelt ballads  like ‘I Trust You’ and a remastered version of the aforementioned ‘Can’t Love You More’’ – which, on its own, is worth the entry ticket!

If we cut to the chase, I’ll just tell you that ‘Chronicles Of Life’ is an outstanding contemporary soul album … the sort of album that doesn’t get made too often these days! Right from  the start you know this will be a good ‘un as Tyra channels Curtis Mayfield’s ‘Give Me Your Love’ on the intro to track one… ‘All The Way’. By now you should have guessed that Tyra Levone’s Chronicles Of Life’ comes hugely recommended! Please investigate!