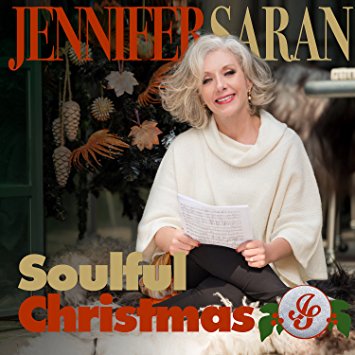 JENNIFER SARAN is an American pop/adult, singer/songwriter who now works out of Hong Kong and in normal circumstances we probably wouldn’t feature her here in the august pages of SOULANDJAZZANDFUNK. However, her latest album, ‘Soulful Christmas’ is worth checking for a number of reasons. First, it was produced and arranged by Narada Michael Walden (it was recorded in his Tarpan studios); second, the main backing vocals are provided by our old friend Cornell CC Carter; and third, the album features a guest appearance from the mighty TEMPTATIONS!

The Emperors of Soul duet with Jennifer on the album opener ‘Christmas Lover’ and it’s a seasonal, soulful stunner. Temptations’ main man Otis Williams opens proceedings with a brief but spine-tingling spoken intro before the rest of the band (chiefly Ron Tyson) duet with Ms Saran. The harmonies, as you’d expect, are impeccable and Otis offers another monologue midway, building to a harmonic finale. In the absence of any new material from the Temptations, this is a Christmas must have!

Elsewhere on the 17 tracker, Jennifer offers her versions of Christmas favourites alongside a selection of her own songs. Standout, though, is the Temptations-featured ‘Christmas Lover’.