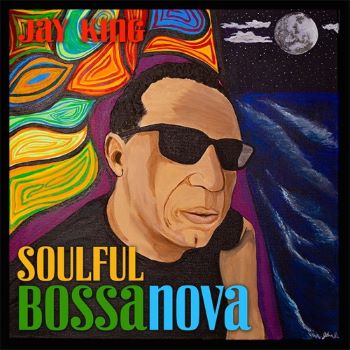 Sometime lead voice in Club Nouveau, JAY KING has just launched a new album – ‘Soulful Bossa Nova’ – and it’s already being acclaimed as THE sensual album of the year!

The title sums up the overall soundscape… the 13 tracker is bathed in Brazilian flavours (gentle bossas and stately sambas) but garnished with soul sensitivities and delivered in Jay’s velvet, smooth voice. He told us about the idea behind the recording: “Because I LOVE Bossa Nova music, Joao Gilberto and Carlos Jobim and Marvin Gaye is my favourite artist of all time, I set out to create what I coin as Soulful Bossa Nova or Cool R&B. You’ll hear different elements throughout the project on different songs. We have married R&B, Jazz, Samba & Bossa Nova to create a new musical movement.” In honesty, that’s  exactly what Jay has achieved!

The album’s release was trailed by the single – a sensuous ‘All Your Love (All Nite Long)’. It was (indeed is) a classy, late night, Quiet Storm groove with obvious references to King’s love and respect for Gaye. The single came with a couple of extra mixes – one featuring input from Lenny Williams, Glenn Jones and Li Barry – which upped the sensuality quotient.

‘All Your Love (All Nite Long)’ is just one of many highlights on the album. Amongst the early attention grabbers is ‘Baby Let’s Dance Tonight’ – the message is obvious from the title. It’s a classy up-tempo bossa nova with a touch of steppers magic about it. It would sound great on ‘Strictly’! ‘I Want Your Love’ is very Jobim (ish) – it even has a Stan Getz style sax weaving between Jay’s vocal lines. ‘Breathe’ is a faster bossa and if you factor in a clutch of gentle, acoustic-guitar themed tunes you have a properly mature and sophisticated 13 track soul album. Three of those cuts are remixes – so you get two versions of ‘Opened Up My Heart’, the aforementioned ‘I Want Your Love’ and a wonderful ‘Feels So Nice’ (that could be an alternative album title!). Odd, maybe, that those mixes of ‘All Your Love (All Nite Long)’ aren’t included.

On ‘Soulful Bossa Nova’ Jay King has mixed a heady cocktail – fusing the sensual sounds of Marvin Gaye (the layered harmonies are superb throughout) with the charm of Brazilian music. In short this  is music for grown-ups and comes hugely recommended!