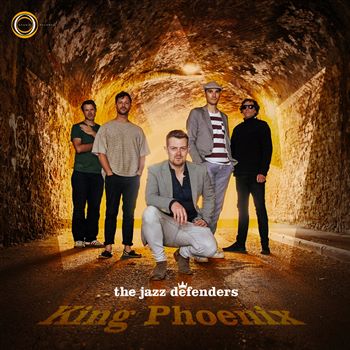 THE JAZZ DEFENDERS are a UK quintet formed by pianist George Cooper. The rest of the band is Nicholas Dover (sax), Nick Malcolm (trumpet), Will Harris (bass) and Matt Brown (drums). Hailing from the Bristol area, they came together in 2015 via a mutual love and respect for soul-jazz and classic hard bop – what they called “the Golden Age of Blue Note”. The band’s debut album, 2020’s ‘Scheming’, reflected their passion for that era with a set that was mainly their take on hard bop.

The Defenders have just released their second long player and rather than extend what they did on ‘Scheming’ the band have decided to experiment with different flavours. So on the ten tracks that make up ‘King Phoenix’ expect their take on soul-jazz, hip-hop jazz, Latin, cinema soundtrack and more.

The album opens with two cuts that hark back to the great soul-jazz of the 60s – ‘Wagger Jaunt’ (yes, as jaunty as the title suggests) and ‘Munch’… the latter very “Jimmy Smith”. ‘Sausade’ and ‘Love’s Vestige’  are the LP’s big Latin moments with ‘Love’s Vestige’ sounding like it’s come straight out of Spanish Harlem. ‘The Oracle’ takes us to the cinema… shades of John Barry and Lalo Schifrin. The track features an impressive string arrangement, beautifully scored and orchestrated by bandleader, Cooper.

Very, very different are two cuts with jazz rappers – ‘Perfectly Imperfect’ (rhyming from Doc Brown) and ‘Live Slow’ with input from Herbal T  whose fast talking over a jazzy soundscape is one of this album’s highlights. More “classic” in a jazz context are ‘Twilight’ and ‘From The Ashes’ which owes just a little to ‘Take 5’. Then there’s a lovely, all too short ‘Queen Bee’. More a sketch than a full tune, it allows Cooper to show off his piano mastery. Not that it’s hiding on any of the other tracks!

The Jazz Defenders: King Phoenix’ out now via Haggis Records.