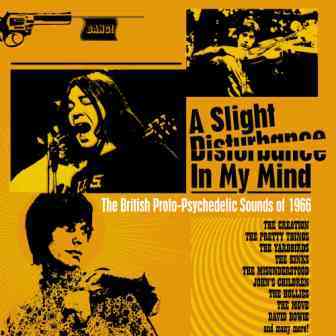 ‘A Slight Disturbance In My Mind’ is a new 3 CD, 84 track compilation from Grapefruit/Cherry Red Records that is subtitled “British Proto-Psychedelic Sounds Of 1966”. Yes it is that – but it’s also a lot more. It’s a snapshot of the British beat/pop scene at a crossroads – moving away from sweet, mop top fabdom to something more adventurous and experimental. As such the compilation will be of huge interest to mods (originals and second generation) and serious music collectors.

Those serious collectors will tell you that in British pop, 1965 was a pivotal year, if only for the release of the Beatles’ ‘Rubber Soul’ which, with tracks like ‘Tomorrow Never Knows’, started to show what pop was capable of. So, dozens of aspiring bands (and many established ones) began to change tack and experiment with rhythms, melodies and lyrics; and plenty of those bands are featured here.

The collection features many 60s big hitters like The Hollies, The Yardbirds, The Bee Gees, The Kinks, The Searchers and Manfred Mann alongside dozens of wannabees and a smattering who would later become famous – people like Marc Bolan, Al Stewart and David Bowie.

No Beatles or Rolling Stones (of course) but a quartet of covers of their songs while Liverpool group, the Kirkbys offer a wonderful ‘It’s A Crime’ which combines the ‘Satisfaction’ style riffing of the Stones with the melodic, harmonic sound of the Fab 4!

Amongst other cuts that are of huge interest is ‘You’ve Gotta Have Love Babe’ from the Graham Bond Organization (a far cry from his soul and R&B roots) and mod band par excellence the Action with their famed and scintillating cover of the Marvelettes’ ‘I’ll Keep Holding On’.

‘A Slight Disturbance In My Mind’ is out now.