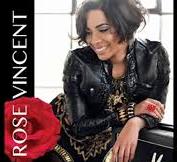 Listeners to the best soul stations over the last month or so will have become familiar with a lovely modern, uplifting soul groove – ‘All Night’ from a lady called ROSE VINCENT. The track’s been all over the place … Magic, Mi-Soul, Jazz FM… even the dear old BBC!

Research reveals that Ms Vincent has a proud music heritage…. her dad’s Stevie V, the brains behind Dirty Cash’s ‘Money Talks’ from back in the day. Out on her own Rose has worked with (amongst others) Finely Quaye, Betty Wright and Jarrod Lawson and played at the Jazz cafe and 02Indigo. Recently she teamed up with the wonderfully named Carmichael Musiclover and the pair began laying down some tracks in both London and Atlanta.

The result is a compact and perfectly formed nine track long player, named for the aforementioned ‘All Night’. The release of the song just before the album launch has created lots of interest and little wonder; it’s a simple, effective modern soul groove ticking all the boxes for the current scene.

The good news is that it’s not the only goodie on the LP. ‘Thankful’ is another potential floor filler – maybe a bit more contemporary R&B than modern soul , it has bags of appeal – reminds me of Sunshine Anderson’s ‘Heard It All Before’. ‘Changes’ is a lovely intimate ballad while ‘Rocket Ship’ is a sweet ballad with Louis Allton … cute in the best kind of way. ‘Hold It Down’ is another duet – this time the duettist is our old friend Mr Musiclover who adds a hint of drama to proceedings.

The big attraction of this album is its freshness and youthful vitality… possibly stemming from the way it was recorded. Rose says: “When I was recording the album, I adopted Carmichael’s recording style which meant no pen or paper! The basis of each song is recorded in real time with no preparation, you go into the booth; start the music and freestyle any melodies or lyrics which the music makes you feel. This way you stay true to the music! and it has really worked with the response from fans, radio presenters, radio stations and journalists have truly been beyond my wildest dreams”.

ROSE VINCENT’S ‘All Night’ will be available from September 7th