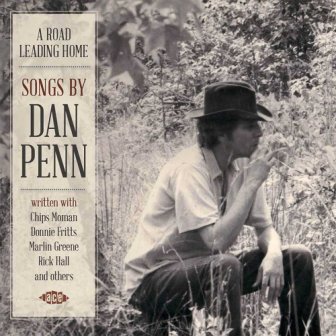 ‘A Road Leading Home’ is Ace Records 24 track tribute to the song writing talents of DAN PENN. The label has already spotlighted his stellar work with long time associate SPOONER OLDHAM, but this time the Ace crew turn the spotlight on PENN’S work on his own and with other collaborators – like RICK HALL, CHIPS MOMAN, MARLIN GREEN and DON NIX.

Naturally the compilation is stuffed with Southern soul goodies and it’s impossible to cherry pick. However try the original version of ‘You Left The Water Running’ from BILLY YOUNG, the Chess-licensed ‘I Tried To Tell You’ from THE ENTERTAINERS or THE SWEET INSPIRATIONS’ ‘Oh What A Fool I’ve Been’

Working in Muscle Shoals and Memphis, PENN was also involved in the country scene and that part of his career is represented by inclusions from RONNIE MILSAP, THE HACIENDA BROTHERS and TED RODDY – all proving once again that country and soul are natural bed fellows.

PENN’S own recording of ‘Is A Bluebird Blue’ shows he was a decent singer too. It was recorded back in 1965 while the most recent cut dates from 2005. It’s BEN MOORE’S ‘Better To Have It’ from the former PURIFY BROTHER’S “comeback” album. The retrospective’s title track by the way comes courtesy of ALBERT KING.