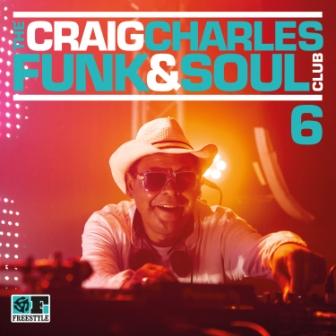 Over the last few years genial Scouser CRAIG CHARLES has reinvented himself! From soap and comedy actor, our man is now a hugely respected soul and funk DJ – regularly filling clubs up and down the land and hosting his own always intriguing radio shows. As part of this new career trajectory CC has curated and complied an excellent series of albums for Freestyle Records… and, hard to believe, he’s just launched volume 6 in the series!

Like the previous five, this new 19 tracker is stuffed with classy, quality indie soul and funk…. jazz too, though the album titling…. ‘The Craig Charles Funk & Soul Club’ … omits the jazz tag. Is the label frightened that “jazz” might put people off? Whatever, there are plenty of jazz grooves here – like the Lewis Express’ homage to the golden age of soul-jazz. Their ‘Brother Move On’ recalls the spirit of Ramsey Lewis and Young-Holt. We recommended their album when it was released this summer. Amongst the other jazz grooves are the cool ‘Rebel No. 23’ from Chip Wickham and Courtney Pine’s Omar-vocalised ‘Rules’. Latin flavours are represented by Orquesta Akokan’s ‘Mambito Rapidito’ and Grupo Magnetico’s fiery take on ‘Papa Was A Rolling Stone’.

Soul highlight is the Bamboos’ ‘Golden Ticket’ and speaking of the Bamboos, their main man, Lance Ferguson is featured with his brand new take on the Googie Rene classic ‘Smokey Joes La La’

Not all the music is new … rare grooves are represented by The Mighty Ryeders’ ‘Evil Vibrations’ from ’78 (the building block, you’ll remember for De La Soul’s ‘A Roller Skating Jam Named ‘Saturday’s’) and Brian Auger’s 1975 outing ‘Foolish Girl’

Craig reckons that this new album is his best yet – well he would say that wouldn’t he? However, I’m not going to argue; there’s plenty of everything here – something for all soul, funk and, yes, jazz fans.