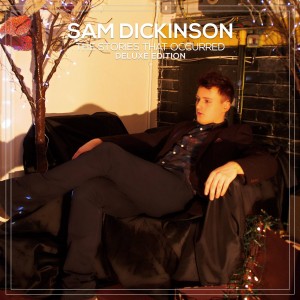 North Eastern England has recently revealed itself as a soul hotbed. First there was the Solutions duo, whose ‘Listen’ is shaping up as one of the year’s top tracks; now there’s a young singer songwriter called SAM DICKINSON who’s just started to wow Geordie land before moving on to the rest of the country.

Sam has been crafting his soul-based music for four years and, crediting Jackie Wilson as his biggest influence, he’s recently launched his debut album, ‘The Stories That Occurred’.

The nine track LP has already charted on YouTube’s top 40 while the single ‘Lift Your Head’ has featured on the ITunes soul chart. The song is a plaintive, acoustic ballad but the album boats all kind of other flavours – like the brassy ‘Away From Me’ and the bumpy ‘How It Used To Be’, while fans of the 80s electro thing will delight in the riff-heavy ‘Don’t Come Running Back’.

At the start of August, Sam is re-launching the album in a massive 37 track format. This will contain the original 9 cuts along with all kinds of mixes – including instrumentals, funk workouts and the obligatory house tweaks…. all interesting stuff.

Find out more @ www.samdickinsononline.com and if you’re in the North East in the coming months, then Sam will be playing Newcastle’s famous Hoochie Coochie Club on September 19th.