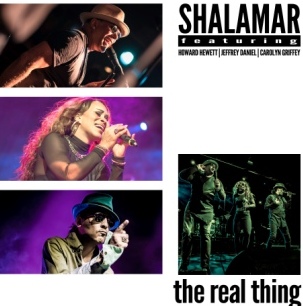 Hard to believe, maybe, but dear old SHALAMAR are right back with us! Through the late 70s/early 80s, the trio (essentially Howard Hewett, Jody Watley and Jeffrey Daniel) crafted plenty of sweet dancers and beautiful ballads that live on… and on!

For all kinds of reasons the trio disintegrated but a few years back Howard Hewett and Jeffrey Daniel got together again and, hooking up with Carolyn Griffey (daughter of group founder and SOLAR Records honcho Dick Griffey), they began touring once again.

Recently the revitalised trio have been back in the studio and they’ve just launched their first single – a tasty, stately dancer. ‘The Real Thing’.

SHALAMAR are about to embark on a UK tour to celebrate the 35th anniversary of the bestselling ‘Friends’ album but, no doubt, they’ll be performing ‘The Real Thing’!

A diligent web search will reveal if Shalamar are playing a venue near you sometime soon!