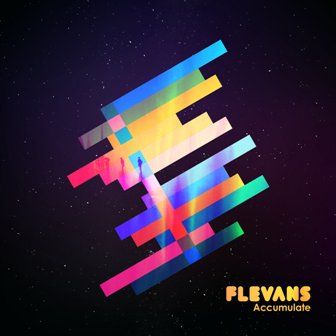 Latest album from UK new age music multi tasker, FLEVANS (aka Nigel Evans) is the 11 tracker that is ‘Accumulate’… a follow up to his 2019 ‘Part Time Millionaire’ and his sixth full LP. He explains that the title is a shortening of the “speculate to accumulate” mantra. He speculated (investing time and money to make the album) and the album is the end result…. the accumulation… logical!

Amongst the highlights on the last album were the tracks fronted by vocalist Laura Vane and the feisty Ms V is out front on five tracks here with the most intriguing being the closing ‘Fireblanket’. The flavour she brings is similar to it the work of the now lauded Izo Fitzroy. John Turrell is another guest vocalist, fronting ‘Silly Games’ and yes, it does sound obvious, but the cut does sound like Smoove and Turrell! Then there are two cuts featuring a mysterious “Scooby Jones” of whom we’re told very little save that he’s worked with Ed Sheeran, the Black Eyed Peas and Craig David. He adds more intrigue to the mix of electro dance, UK funk, quirky pop and cinematic flavours. Out now.