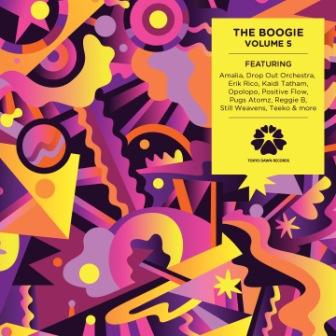 The latest compilation from Tokyo Dawn Records is their fifth volume of “Boogie” tunes … by which they mean a collection of foot tappers and calls to the floor encompassing future soul and electro funk.

The generous 17 tracker is a mix of new stuff alongside a smattering of esoteric oldies – which have been given new tweaks. Best example is Steve Arrington’s ‘Nobody Else But You’ which appears here in an Opolopo mix. The Hungarian mixer retains the crunchy electro effects and leaves Arrington’s distinctive voice well up in the mix. It has though appeared already on another Tokyo Dawn release.

The second Opolopo mix on the album is the Drop Our Orchestra’s ‘Be Free With Your Love’. With big vocal from Vinny Vero it has all the feel of those great Weekender tunes.

The provenance of the rest of the collection is varied and eclectic…. I mean Shanghai, San Francisco, Munich and way beyond. So, worth checking if you’re turned on by “electro hip hop, neon synths, soul chords, vocoders and robot funk”  …. you may want to investigate!

THE BOOGIE volume 5 is out now on TOKYO DAWN RECORDS.