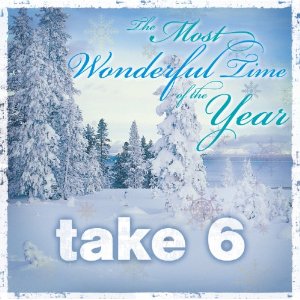 With Christmas still a month away the record racks are starting to croak with the weight of Christmas albums – some new, but many simply re-hashed compilations. If you’re to buy just one this year, the SJF vote would go to a pretty little effort from premier vocal group TAKE 6. Simply entitled ‘The Most Wonderful Time Of The Year’, the album is released on the outfit’s own label via a deal with Heads Up.

The LP’s title cut is one of the standouts along with great a cappella versions of ‘White Christmas’, ‘Sleigh Ride’ and ‘I’ll Be Home For Christmas’. One track, though, marks a little departure for TAKE 6. On the famous ‘Charlie Brown Christmas song’ – ‘Christmas Time Is Here’ – the lead vocal is taken by SHELEA FRAZIER who also adds a subtle piano into the mix. The LP’s other oddity is a version of DR SEUSS’ ‘You’re A Mean One Mr. Grinch’… you don’t hear that one too often these days!