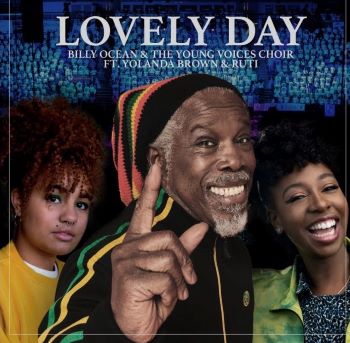 To coincide with Children’s Mental Health Week (February 1st – 7th 2021) and to bring some positivity to these hard times, pop/soul man BILLY OCEAN has teamed up with the YOUNG VOICES CHOIR to release a new recording of the Bill Withers’ classic ‘Lovely Day’. Also featured on the track are award-winning broadcaster and musician YOLANDA BROWN (saxophone) and The Voice UK 2018 winner (and former Young Voices singer) RUTI OLAJUGBAGBE.

The recording has just been released by Magic Star (the home of children’s and family entertainment at Sony Music UK), all UK profits will go to children’s mental health charity Place2Be.

Place2Be launched the first ever Children’s Mental Health Week in 2015 to shine a spotlight on the importance of children and young people’s mental health. Place2Be’s school-based teams estimate that 85% of the young people they support have been negatively affected by the pandemic and have seen an increase in referrals around self-harm and suicidal thoughts in secondary schools. 1 in 6 children and young people have a probable mental health condition.

Billy Ocean says: “We have all been affected in different ways over this difficult last year, and many children have really struggled. I’m so happy to be able to join with Young Voices to help make a difference and to raise funds for children’s mental health with this wonderful and hopeful song.”