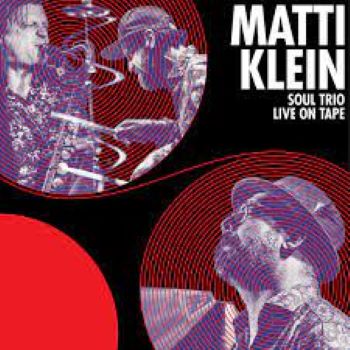 Soul and jazz cognoscenti will be familiar with the name MATTI KLEIN. They’ll know he was the MD for Brazilian favourite Ed Motta and for some time he fronted the jazz outfit, Mo’ Blow. Then  in 2020 with Andre Seidel on drums and Lars Zander on sax and bass stepped out as The Matti Klein Soul Trio and offered the well-received eponymous soul-jazz album. Many critics likened the album to the kind of stuff that came out of labels like Impulse in  the 60s and if that’s your bag, you’ll want to investigate Klein’s latest album…. ‘Soul Trio; Live On Tape’ which was actually recorded in 2018 – two years before that official debut.

It seems that Klein, Seidel and Zander got together three years ago at Berlin’s Lovelite studios to flex their muscles. None of  them wore the usual studio headphones and there was none of the usual studio protocol separation. In effect they played live, working through a set of tunes from their Mo’ Blow era, placing them into a  soul-jazz setting . Of note is their homage to Ray Charles (titled simply ‘Ray) while ‘Grandpa’s Fairytale’ is another homage offering – this time dedicated to Klein’s grandfather. The leader’s warm Wurlitzer echoes the affection he clearly had for granddad! Unusually (maybe) there’s a vocal. The  sparse and funky ‘Nor Particular Way’ features vocals from Pat Appleton.