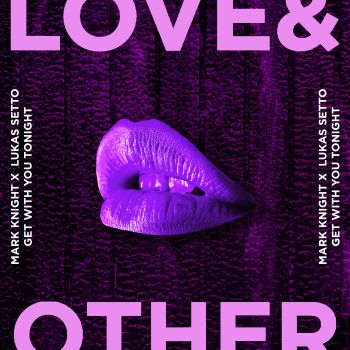 MARK KNIGHT is a celebrated British house DJ/producer who’s graced the scene for many years. The man is rarely still. Just this year he’s headlined shows and festivals worldwide and remixed stuff like Avicii’s – ‘My Feelings For You’.  He’s also collaborated  with House Music legend Armand Van Helden on ‘The Music Began To Play’. In between all this  he runs his own Toolroom Records. However his latest release  comes via another imprint, Love & Other but that doesn’t affect the soul/dance quotient one iota!

MK’s new cut is a lovely, crisp  soulful dancer, ‘Get With You Tonight’ and helping Mark deliver is none other than Brit soul stylist LUKAS SETTO. Lukas (who’s previously worked as Lee Henry, Jadan Lee and Tru Menace) is currently having a great run. Just this August for instance he impressed with  ‘My Destiny’, so you can imagine that he handles the urgent  ‘Get With You Tonight’ with a proper soulful aplomb!

The tune  is a real feel-good affair with a slick production that will appeal to both the soul and soulful house crowds.