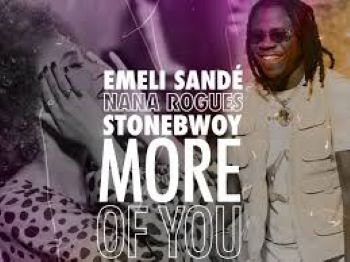 BRIT Award winning artist EMELI SANDÉ has just released a brand-new single…. ‘More Of You’. If you’re a BBC Radio listener, you may well have heard it already. It’s everywhere and shaping up to be a big tune!

‘More Of You’ is a collaboration between Ms S and award-winning Ghanaian artist and Grammy nominee Stonebwoy alongside British producer and songwriter Nana Rogues, whose global hits include Drake’s ‘Passionfruit’. We’re told that ‘More of You’, released on new record label, Manchester based ‘Sengge Zangbo (Lion River)’, is meant to capture the moment of falling in love in a joyous, energetic song infused with a beautiful new wave of afro soul.

The song is an Emeli original which she wrote in LA, she says: “I was falling in love and I wanted to sum up the feeling that creeps up on you and catches you by surprise. First the feelings are subtle, a strange sensation of missing someone you consider a friend which starts to build. In this song I wanted to capture the crossover moment when you realise the subtle feelings you once perhaps denied have now been realised into something undeniable you want to shout from the rooftops. You can’t get enough; you can’t share their love and want the whole world to know how beautiful they are to you.” Now you know.

In the modern way, the track comes in a plethora of mixes courtesy of London based mixer and DJ, Gary Booker in his Booker T guise. Right now, we’re liking the lithe and lovely Soulful House mix which captures the optimism which Emeli built into the song!