A LEGEND IN HIS OWN LUNCHTIME… 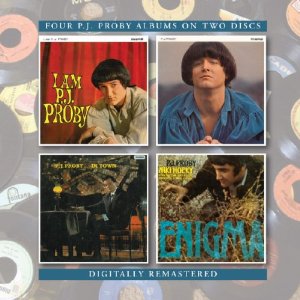 American pop singer P J PROBY was a genuine 60s icon. Born JAMES MARCUS SMITH in Texas in 1938, he pitched up in Hollywood in the late fifties with a determination to make it as a singer. His emotive blue-eyed soul voice soon won him a recording deal but his career took off when high flying TV exec JACK GOOD brought him to the UK in 1964 to appear in  a BEATLES TV special. Dressed in flamboyant Regency style and sporting a (then) unusual pony tail coiffeur he was an overnight success and his single ‘Hold Me’ scaled the charts. More hits followed but it was his personal life and stage antics rather than the music that soon grabbed the headlines. He had a penchant for allowing his tight trousers to rip open on stage (when he actually bothered to show up to perform) and his predilection for young groupies brought him lots of media flak. Soon his career was in a downward spiral and PROBY was eventually consigned to the cheap cabaret and curiosity circuit. He attempted numerous serious comebacks with little success, frustrating those who saw a major talent sacrificed in the pursuit of controversy.

You can catch up with the intriguing and sometimes sordid P J PROBY legend on a brand-new BGO Records release which pulls together four of his 60s albums – ‘I Am P J Proby’, ‘P J Proby’, ‘In Town’ and ‘Enigma’. Old soul fans will be delighted by the fact that all four are littered with interesting soul covers like JAMES BROWN’S ‘I’ll Go Crazy’ and JACKIE WILSON’S ‘Lonely Teardrops’ and indeed ‘Enigma’ consists almost entirely of soul songs like THE RADIANTS’ ‘I Want To Thank You Baby’ and JERRY BUTLER’S ‘You Make Me Feel Like Someone’. On all, the delivery is mannered and sometimes over the top but there’s no denying the man’s blue-eyed soul credentials. Find out more @ www.bgo-records.com