A FORCE OF NATURE…. 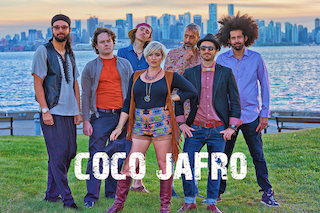 COCO JAFRO are a hard working soul n’ funk combo working in around Canada’s beautiful Vancouver. The seven piece say their main influences are Santana, Chaka Kahn and Stevie Wonder though they also embrace Latino, reggae and Afrobeat rhythms. Hear all of that and more on the band’s latest long player.

‘Forces Of Nature’ is Coco Jafro’s third long player – following their debut instrumental set and the 6 song EP that was ‘Voodoo’. The album’s title track sums up exactly where the band are at. ‘Forces Of Nature’ (the track) is a hard driving, funk workout with shades of classic Earth, Wind and Fire – brash and brassy with a convincing feisty femme vocal from Karina Morin. The rest of the band are Amine Said (Guitar), Karl Oystensen (keys) Jean Sebastien LeDoujet (Bass), Sangito Bigolo (Percussion) Chris Couto (Drums) and Dominic Conway (Tenor Saxophone)

‘Forces Of Nature’ offers two other immediate grabbers – a punchy ‘Marhaba’ – which, at the risk of causing confusion, I’d describe as “Steely Dan does Latin!” and the sweet ‘Fallin”. ‘Fallin” is the album’s most understated cut and the better for that – this is the one that soul crowd will have no problem in connecting with.

Elsewhere there are several loose band jams like ‘Common Ground’ that would benefit from tightening up; a reggae excursion in the form of ‘Do What I Want’; an overly dramatic ‘Nomad’ and the jazzy ‘Biliki’ which features rocky guitar and crazy flute. Yep, plenty of variety and never less than interesting.