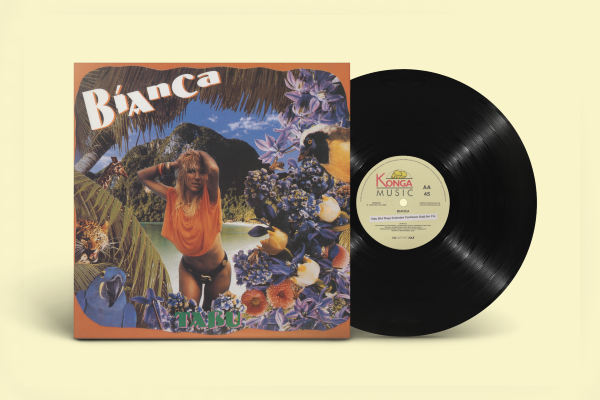 The wonderfully named BIANCA BINKY is/was a French singer who made just a handful of records – most of ’em forgettable European synth-pop. However, her final solo single from 1990 ‘Tabu’ has won itself a cult following for its piano-led, tactile Balearic flavour.

Phil Cooper, head honcho @ NuNorthern Soul loves the tune and knows of its collectable status so, he says, why not reissue it! And that’s just what he’s done –  giving the old chestnut a de-luxe makeover!

The story goes like this: Original producer Felix B Mangione (head of Blanco Y Negro Records) had long since lost the original master tapes, so Cooper flew from Ibiza to Barcelona to pick up one of the only mint vinyl copies still available, before forwarding high-quality digital transfers on to Robin Lee for remastering.

The result is what Cooper’s PR people call “a sun-soaked fusion of synthesised marimba melodies, spine-tingling piano riffs, dreamy chords, Chicago-style TB-303 bass and Binky’s sensual spoken word vocals” . See how accurate that description is via investigation when ‘Tabu’ hits  the sales racks  on August 12th . For added extras there’s a club friendly alternative ‘House Mix’ and a new re-edit of the legendary ‘Caribbean Dub’ – first featured on the flip-side of the original release – from Manchester’s finest, Ruf Dug.