A FEAST OF FRED…. 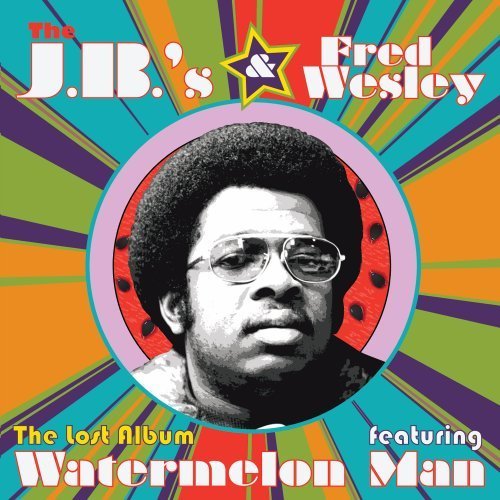 Funk fans know that in the 70s the tightest team on the block were the JBs. The band members were handpicked by their boss, JAMES BROWN, and from the start the Godfather knew the man he wanted to lead them had to be jazz trombonist FRED WESLEY. WESLEY went on to lead the band through one of BROWN’S peak periods and it’s his solos that shine on ‘Soul Power’, ‘Gimme Some More’, and ‘Pass The Peas’.

MR B knew the debt he owed WESLEY; so in 1972 he offered FRED the opportunity to cut his own jazz album under the name THE JB s & FRED WESLEY. With BROWN producing, FRED went into studios in New York and began recording. Eventually a single – ‘Watermelon Man’ – was released but the LP was cancelled.

Now – for the very first time – the album has won a release… thanks to the archivists at Hip-O Select. The original album, which was to be released on the People label, was to have nine tracks -three of which were subsequently issued in varying forms; so here there are six previously unissued cuts, including a swinging version of ‘You Got A Friend’. Interestingly, WESLEY’S band, the JBs, feature on just one track – the aforementioned ‘Watermelon Man’ (BROWN on drums here, by the way). The rest of the music was recorded using the very best New York session men including the BRECKER BROTHERS, JOE FARRELL, STEVE GADD and RON CARTER.

The album boasts four bonus cuts – a mellow version of GILBERT O’SULLIVAN’S ‘Alone Again Naturally’, a lively take on the O’JAYS’ ‘Backstabbers’, and two funk workouts – ‘JB Shout’ and ‘Funky & Some’. All four have at some time been released as parts of singles but they were recorded at the same time as the aborted LP.

As with all Hip-O products, the notes are fascinating, informative and include full track details