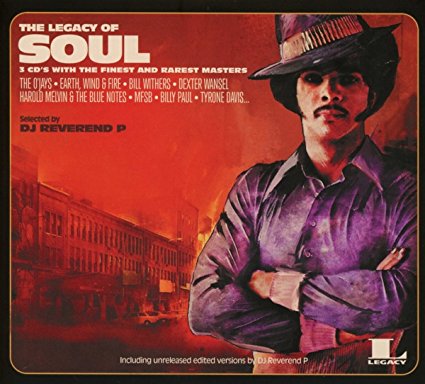 PATRICE LARRAR (below) is a top Parisian DJ who works under the moniker, DJ REVEREND P and his soul and Motown nights are famed throughout France. To make his nights go with more swagger, the Rev took to creating his own special, extended mixes of classics and rarities that he played out and via a deal with his label (GAMM) and Sony/Legacy, some of his best mixes have become commercially available and two new batches are now good-to-go.

First up there’s two 12″ singles marketed under the tag ‘Legacy Of Funk’. The tracks across the four sides are The Jacksons – ‘That’s What You Get for Being Polite’, Marvin Gaye – ‘Rockin’ After Midnight’, Michael Wycoff – ‘Looking Up To You ‘ and The Isley Brothers – ‘So You Wanna Stay Down’. All these mixes are previously unreleased.

The second set goes out as ‘Legacy Of Soul’ and features stuff like The O’Jays’ ‘Back Stabbers’ (10 minutes plus, this one) and MFSBs ‘Used Ta Be My Guy’ and for those who like those new fangled things called CDs, all the music, along with many more special mixes, is available in that format too.