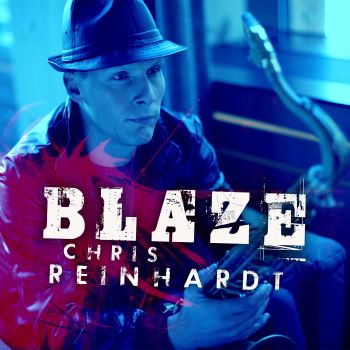 CHRIS REINHARDT is a US sax man who cut his teeth playing in the Alicia Keys band. In 2017 he hit the jazz charts with the single ‘Stay Close’ but right now is busy (well as busy as the pandemic allows) promoting his latest album – the 10 tracker that is ‘Blaze’.

All the compositions are Reinhartd originals and sonically the Astral 22 produced album is a mix of smooth jazz, ambient chill and 90s neo-soul.

New York singer Lenora Jaye tales lead vocal on two of the soul cuts… the insistent ‘Brooklyn Love’ and the jazzier ‘Crossfire’. Jesse Maxwell is out front on ‘Paint Your Soul’ – a typically neo-soul meander.  Felix Dubiel’s piano stars on four tracks – notably the gentle ‘Impulse’ which develops as a piano/sax duet. It’s one of the album’s more ambient moments. Elsewhere ‘Dust And Bones’ is as mournful as the title suggests while ‘Wake Of Light’ offers cinema noir atmospherics.