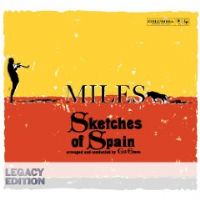 Sony’s archival Legacy imprint is reissuing deluxe versions of three significant jazz albums on May 25th – Dave Brubeck’s ‘Time Out,’ Charles Mingus’ ‘Mingus Ah Um,’ and Miles Davis’ ‘Sketches Of Spain.’ All three classic albums were recorded exactly fifty years ago in 1959, the year that also saw the release of Miles Davis’ epochal and iconic ‘Kind Of Blue’ LP, which has already been given the deluxe treatment by Sony.
Dave Brubeck’s ‘Time Out,’ which spawned the US hit single, ‘Take Five,’ includes a second disc devoted to eight previously unissued performances recorded at the Newport Jazz Festival between the years 1961-1964. Added to the package is a DVD documentary about the album featuring a recent interview with 89-year-old Dave Brubeck (who is also due to play at this year’s Marlborough Jazz Festival in July).
Charles Mingus‘ ‘Mingus Ah Um’ was his debut for Columbia and featured the classic songs ‘Goodbye Pork Pie Hat’ and ‘Better Git It In Your Soul.’ Now remastered and remixed – at 24-bit resolution using a vintage Presto all-tube three-track tape machine – the album comes with a second disc of bonus tracks that include the complete album ‘Mingus Dynasty’ (the overshadowed follow-up to ‘Mingus Ah Um’ also recorded in 1959) and sundry rare and collectable outtakes.
Finally, Miles Davis’ ‘Sketches Of Spain’ – the trumpeter’s third large orchestral collaboration with arranger Gil Evans – gets a deluxe makeover that’s packed with bonus material, including a live version of ‘Concerto De Aranjuez,’ a jazz remake of Rodrigo’s classical guitar concerto that formed the centrepiece of the original album.