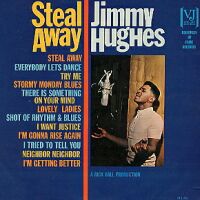 To celebrate the 50th anniversary of one of Southern soul’s seminal albums – JIMMY HUGHES’ ‘STEAL AWAY’, Ace/Kent are reissuing the set on a 180g vinyl 12″ long player. The original, of course, was the first album released on Fame Records and it features the Fame studio’s original rhythm section.

When the LP was first released in summer 1964, it scraped into the US top 20, but when Fame distributor, Vee Jay went bankrupt, ‘Steal Away’ stole away from the chart radar. Subsequently original albums are very, very rare and much sought after.

The album’s title cut is an acknowledged Southern soul classic but the album also features the wonderful ‘Neighbour Neighbour’ (check out the Stevie Winwood-vocalised Spencer Davis Group cover, by the way)

This new edition of ‘Steal Away’ is out now and comes in fetching blue vinyl!