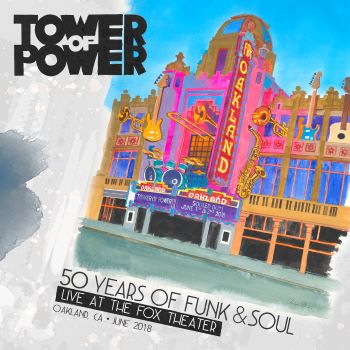 Back in 2018, the mighty TOWER OF POWER celebrated 50 years of making their distinctive, brass-fired take on soul and funk. Indeed, the band did come together 50 long years ago – in the summer 1968 when rising sax star Emilio Castillo teamed up with baritone player Stephen “Doc” Kupka to form a band which they called The Motowns. To attract West Coast audiences (particularly at venues like the Fillmore) Emilio and Doc quickly changed the band’s name to Tower Of Power and, blazing out of Oakland, the rest is, of course, history. Through numerous personnel changes and via countless classy albums and exhilarating concerts TOP have become soul and funk legends. Revered and venerated, they’re still peddling the same excitement that they began with back in 1968.

So forward again to 2018. In June that year TOP played two concerts at Oakland’s Fox Theatre to celebrate their Golden Anniversary and the good news is that the shows were caught on tape (or whatever things are caught on in these digital days!) and the resulting live album and concert DVD will be released on Artistry/Mack Avenue on March 26th. The album is, rightly, called ’50 Years Of Funk And Soul’ and its classic, window-rattling, raucous TOP all the way.

For the shows the band were at their 10 pieces best (with an added string section) but Emilio invited back some TOP alumni, including saxophonist Lenny Pickett, keyboardist Chester Thompson, guitarist Bruce Conte and former vocalist Ray Greene, who also shows off his trombone prowess. Adding a touch of poignancy some of the bass parts are taken by Francis “Rocco” Prestia, who sadly passed away in September 2020.

The concert set list spans the band’s history; there are classic hits ‘You’re Still a Young Man,’ ‘What is Hip?’ and ‘Don’t Change Horses’ and newer items like ‘Stop’ and ‘Do You Like That?’. Intriguingly and with a hint of prophecy (it was 2018 remember?), they also play ‘Soul Vaccination’. Amongst the highlights are the Godfather medley ‘Diggin’ On James Brown’ and the evergreen and still beautiful ‘So Very Hard To Go’ on which vocalist Marcus Scott proves he’s every bit a match for Lenny Williams and all the other great vocalists who’ve fronted the band.

The concerts are delivered across 2Cds (22 tracks in total) while the DVD runs for 146 minutes and it’s packed with extras and it will be good to go from March 26th.

Emilio Castillo says: “People come up to me all the time and say, ‘Wow man, 50 years! We can’t believe it.’ You can’t believe it? I’m the one that can’t believe it. We’ve been through a lot of ups and downs and learned a lot along the way. We’ve affected a lot of people’s lives and done a lot of work that we’re very proud of. The band has a real family atmosphere. It’s been very rewarding.”

’50 Years Of Funk And Soul’ is a fitting tribute to a soul and funk institution and, equally importantly, it offers a reminder of the communal joys of the live music experience, something that’s been sorely missed over this dreadful pandemic year.