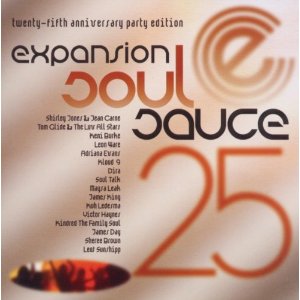 Ever-dependable EXPANSION RECORDS is celebrating its 25th anniversary with three corking new compilations. The label was formed in 1986 by JON ANDERSON and RICHARD SEARLING and it was originally going to be called Impact; then the duo thought about Windy Weather – before (thankfully) deciding on Expansion. The idea was to release in-demand tracks that had made names for themselves in the hipper soul clubs and on soul radio shows (like ROBBIE VINCENT’S). After a short time RALPH TEE came on board and his management and administration skills saw the fledgling label really take off… and now there’s plenty to celebrate.

The first of the label’s new compilations is EXPANSION SOUL SAUCE 25. The name is shared with RICHARD SEARLING’S legendary radio shows and, of course, ‘Soul Sauce’ was the title of Expansion’s first compilation series. This new set features 15 tracks that give just a flavour of the label’s heritage. There’s classics from favourites like LEO’S SUNSHIP, JAMES KING and MAYSA LEAK along with lots and lots of brand new soul including a duet between Philly legends SHIRLEY JONES and JEAN CARNE and a KENI BURKE/COOL MILLION collaboration.

The second super new set is LUXURY SOUL. This is a double CD 30 tracker which has been specially complied by RALPH TEE. It’s a wonderful look back to the magic sounds of the mid 70s and early 80s and features memory-jerkers from people like PHYLLIS HYMAN, NOEL POINTER, BEAU WILLIAMS, THE GAP BAND and ATLANTIC STARR. RALPH’S sleeve notes make relevant comments about musical longevity, downloading and illegal file sharing.

The third of Expansion’s terrific trio is the annual SOUL TOGETHERNESS beano. The quality is as remarkable as ever and the set offers classics old and news from the likes of REEL PEOPLE, MARY MARY and those wonderful Aussies ELECTRIC EMPIRE… who – you may remember – got their first non-Australian media coverage right here at SOULANDJAZZANDFUNK – which is where you’ll get the very best and most carefully considered reviews of these three new Expansion sets.