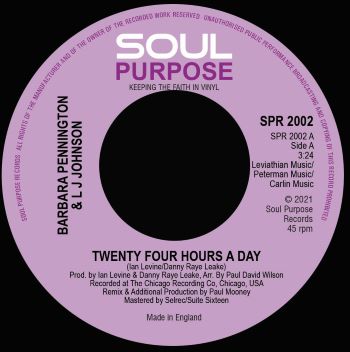 Dance fans will have a soft spot for BARBARA PENNINGTON’S ’24 Hours A Day’. It was crafted in 1976 by the infamous Ian Levine who linked up with Chicago studio wizards Paul Wilson and Danny Leake to tailor make a Disco/Northern sound. And it worked. It became the first hit helmed by Levine, even though some of the Northern crew were a little dubious.

Levine was chuffed by the success and went on to use the same backing track for a version by LV JOHNSON,  but it never quite took off. Now 45 years later both those records come together in a “new” version of the song. It’s been produced by Paul Mooney who marries the Pennington version to the Johnson take in the manner of, say, Ashford and Simpson… and it works!

It still zips along  while the vocals are full on! Some critics are saying it’s better than the original. See if they’re right by tracking down the release via Soul Purpose Records 7”.